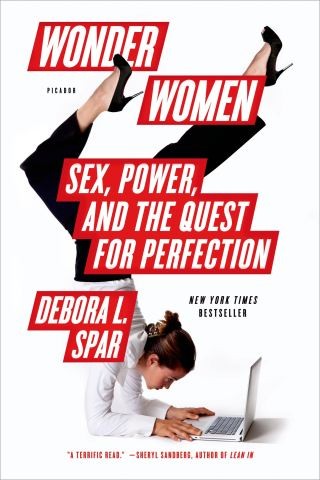 Sex, Power, and the Quest for Perfection

Fifty years after the Equal Pay Act, why are women still living in a man's world?

Debora L. Spar never thought of herself as a feminist. Raised after the tumult of the 1960s, she presumed the gender war was over. As one of the youngest female professors to be tenured at Harvard Business School and a mother of three, she swore to young women that they could have it all. "We thought we could just glide into the new era of equality, with babies, board seats, and husbands in tow," she writes. "We were wrong."

Now she is the president of Barnard College, arguably the most important all-women's college in the United States. And in Wonder Women: Sex, Power, and the Quest for Perfection—a fresh, wise, original book— she asks why, a half century after the publication of Betty Friedan's The Feminine Mystique, do women still feel stuck.

In this groundbreaking and compulsively readable book, Spar explores how American women's lives have—and have not—changed over the past fifty years. Armed with reams of new research, she details how women struggled for power and instead got stuck in an endless quest for perfection. The challenges confronting women are more complex than ever, and they are challenges that come inherently and inevitably from being female. Spar is acutely aware that it's time to change course.

Both deeply personal and statistically rich, Wonder Women is Spar's story and the story of our culture. It is cultural history at its best, and a road map for the future.

Debora L. Spar: Debora L. Spar is the president of Barnard College, a women's undergraduate college affiliated with Columbia University. She received her doctorate in government from Harvard University and was the Spangler Family Professor of Business Administration at Harvard Business School. Spar is the author of numerous books, including Ruling the Waves: Cycles of Invention, Chaos, and Wealth from the Compass to the Internet and The Baby Business: How Money, Science, and Politics Drive the Commerce of Conception.